Hi and welcome to another NZADDs email update,

The commentary is based on Glenn’s work writing the PNG National Human Development Report and provides recommendations on how MFAT can engage with PNG to help turn the country’s recent resource boom into genuine development improvements. You can download the commentary here (pdf).

The Asian Infrastructure Investment Bank
The Development Policy Centre’s Australasian Aid Conference is done and dusted for 2015. The whole conference was interesting (you can watch some of the sessions here) but the most interesting part, at least for this New Zealander in the audience, was the discovery, during Zhou Qiangwu’s talk (which you can watch here — he doesn’t start talking until 12 minutes in) that New Zealand has recently become the first OECD country to join the Asian Infrastructure Investment Bank. The bank is a Chinese-led multilateral designed to help fund infrastructure investment in poorer parts of Asia and the Pacific. It is also an attempt, it would seem, at geopolitical manoeuvring, intended to offer developing countries alternatives to existing multilateral lenders and, at least according to some, to bolster China’s influence. Time will tell whether this is good for development. In his talk Mr Qiangwu promised good practice, and if this is delivered upon, good development outcomes could follow. Speaking as a discussant at the talk, Professor Stephen Howes made a strong case for the bank (his comments start just over 48 minutes into the audio linked to above). Similarly, Philippa Brant from the Lowy institute makes the case for joining the bank here. There arguments could be correct, but this hasn’t stopped the bank from being cause for angst: John Kerry apparently called Tony Abbott personally to ensure that Australia wouldn’t join.

Beyond the geopolitics and promises of good practice there lies the issue of which countries are (and will become) donor members, and how this will shape the bank’s behaviour. As bank membership currently stands, New Zealand has, in its swiftness to join, found itself amongst an interesting club of member countries. The chart below lists each of the current member countries. The Y-axis runs from 1 to 7 and each bar plots the country’s score on the Freedom House measure of civil and political freedoms. Countries in blue are free and democratic, countries in red middling, and countries in green are autocratic. 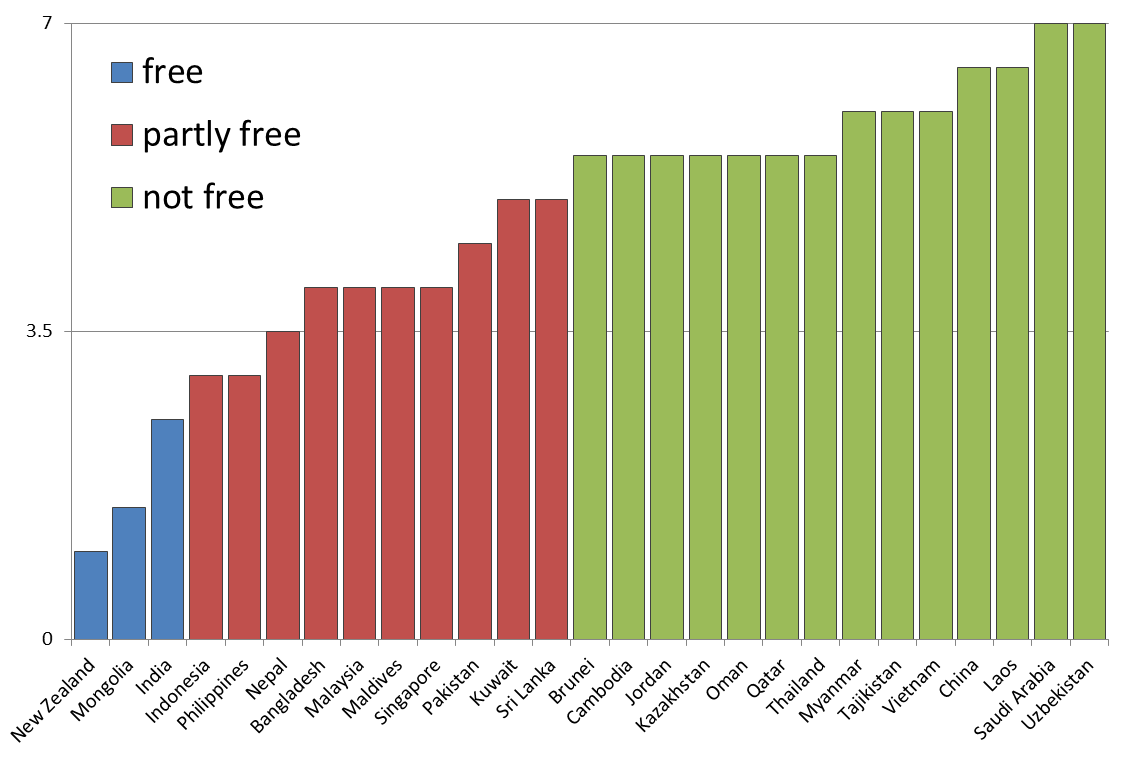 For the time being, the majority of bank members (52%) are autocracies, while only two other countries (alongside New Zealand) are unambiguously democratic. Perhaps this doesn’t matter but, on the other hand, in the OECD at least, an active civil society in donor countries, which tries to prevent aid from going awry and being used for ill intent, appears an essential part of the struggle to give aid well. Which raises the question: what sort of aid will emerge from a bank dominated by non-democratic countries?

In the meantime, searching the websites of MFAT and the New Zealand government aid programme provides no information about our membership of the bank, or any details of what we will contribute to it, or why we think joining the organisation as it currently stands is a good idea. We await more news.

A Plea for Transparency
On the subject of transparency, those of you following the negotiations of the Trans-Pacific Partnership Agreement, may be interested in a recent news item from the NZ Herald:
“New Zealand and Australian clinicians have made a call in the world’s leading medical journal for secret details of the Trans-Pacific Partnership Agreement to be made public.

“But despite a letter published today in The Lancet — and signed by 27 health leaders in Australasia as well as the US, Canada, Malaysia and Chile — Trade Minister Tim Groser this afternoon reaffirmed the Government’s stance of not releasing controversial TPP negotiating documents.

“The TPP agreement, which has been negotiated controversially behind closed doors over the past several years, aimed to create a regional free trade agreement involving 12 Asia-Pacific countries, including New Zealand.

“The Lancet letter pressed for public disclosure of the full draft text of the 12-nation agreement, so any broad health impacts could be assessed before it is signed.”

And finally Amartya Sen has an elegant essay on universal health care in developing countries, Ben Day has two great blogs on Julie Bishop’s approach to aid, Matt Allen writes about a politically fraught potential environmental disaster in Solomon Islands, and Chris Peters takes the IMF to task for hypocrisy on tax.

That’s all for now.