Hello and welcome to an NZADDs update,

It’s Murray McCully commemoration time in the New Zealand media. We’ll have more to say about his legacy in coming weeks. But for now as a public service in the name of accuracy, I’ve prepared some charts to help in assessing the changes the minister wrought.

I was inspired to do this by an article by Tracy Watkins in which she stated:

“He worked himself to exhaustion on New Zealand’s successful campaign for a seat on the Security Council and earned an international reputation as a fierce and outspoken critic of UN inaction and paralysis.

He stared down his critics – and there were many of them – for his determination to redirect the aid budget to our own back yard, the Pacific, and refocus it on economic development rather than handouts.”

It’s true the Minister’s efforts (alongside those of many others) helped win the Security Council seat. And it’s true that the minister has also said nasty things about the UN. Indeed, in a recent speech he gloated that,

“if on the second of May you hear the incessant popping of champagne corks at the headquarters of many of the world’s multilateral funding institutions, do not be surprised…These giant process-driven bureaucracies generally deliver a below-average quality of service to the poorer countries of the world, especially those in our region where compliance regimes designed for central Asian countries of 50 million people are a deal breaker for a country of 10,000 like Tuvalu. I plead guilty to having spent a good part of the last eight years persuading, cajoling, criticising, hectoring, and threatening to withhold budgets in order to try to achieve a more realistic, timely and effective service for our smaller neighbours.”

This is tough talk, and consistent with comments he has made about multilateral organisations throughout his tenure. But were these beliefs reflected in aid funding at all?

The first chart below shows the share of New Zealand government aid given bilaterally versus the share given multilaterally. The data come from the OECD and are by calendar year. The first year McCully’s budget choices had any affect on spending was 2009. The first full year affected by his choices was 2010. As you can see, while it’s ever so slightly lower now than before, the share of aid given via multilaterals did not decrease meaningfully under McCully. (The chart is of core funding via multilaterals, if I include earmarked funding as well, trends would not change significantly.) 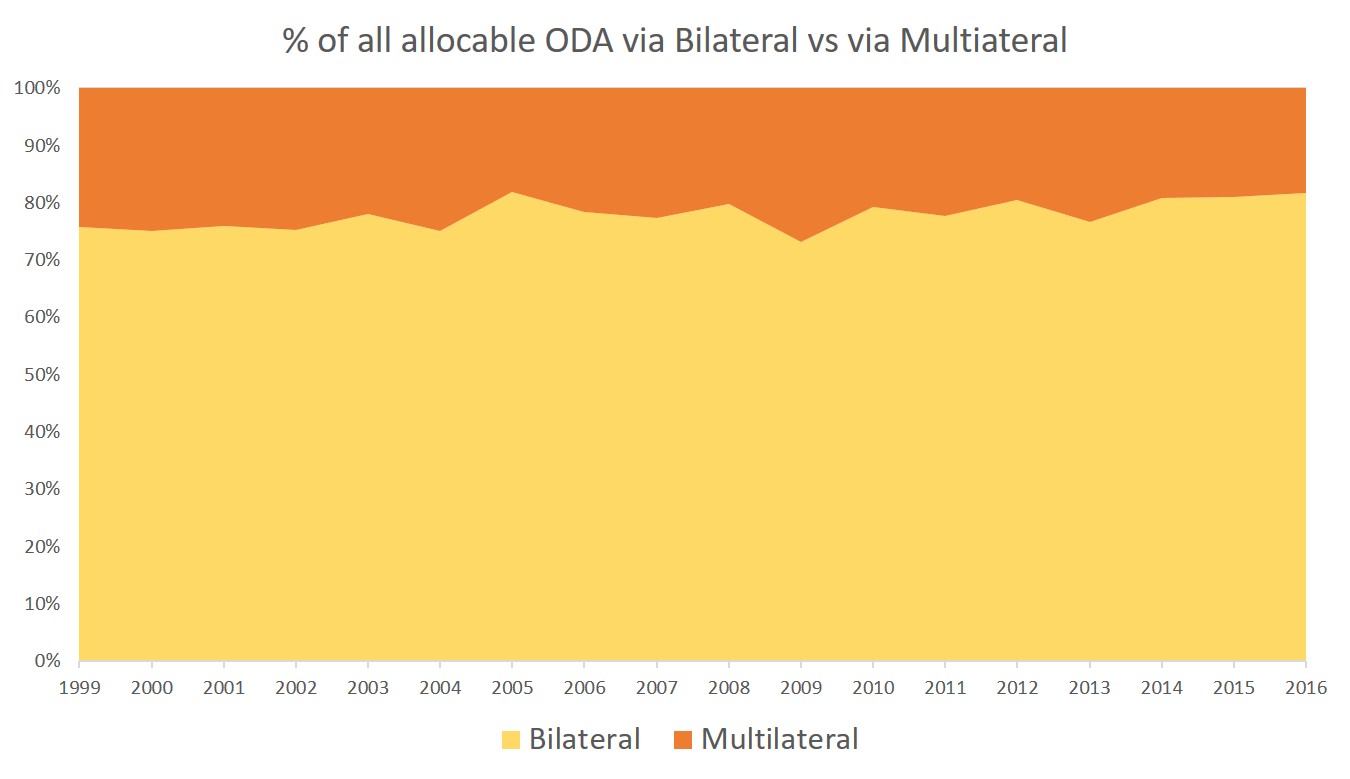 (Sources and calculations for the charts on multilateral aid can be found here.)

Funding to UN development agencies as a share of multilateral aid is shown below. (The World Bank is part of the UN in a sense, but is treated as a separate entity in the world of development).

As you can see, amongst the different types of multilateral organisations that New Zealand gave aid to, UN development agencies did comparatively well under Minister McCully. I don’t think that’s a bad thing. But it’s an odd course of action for a ‘fierce and outspoken critic’ to take. 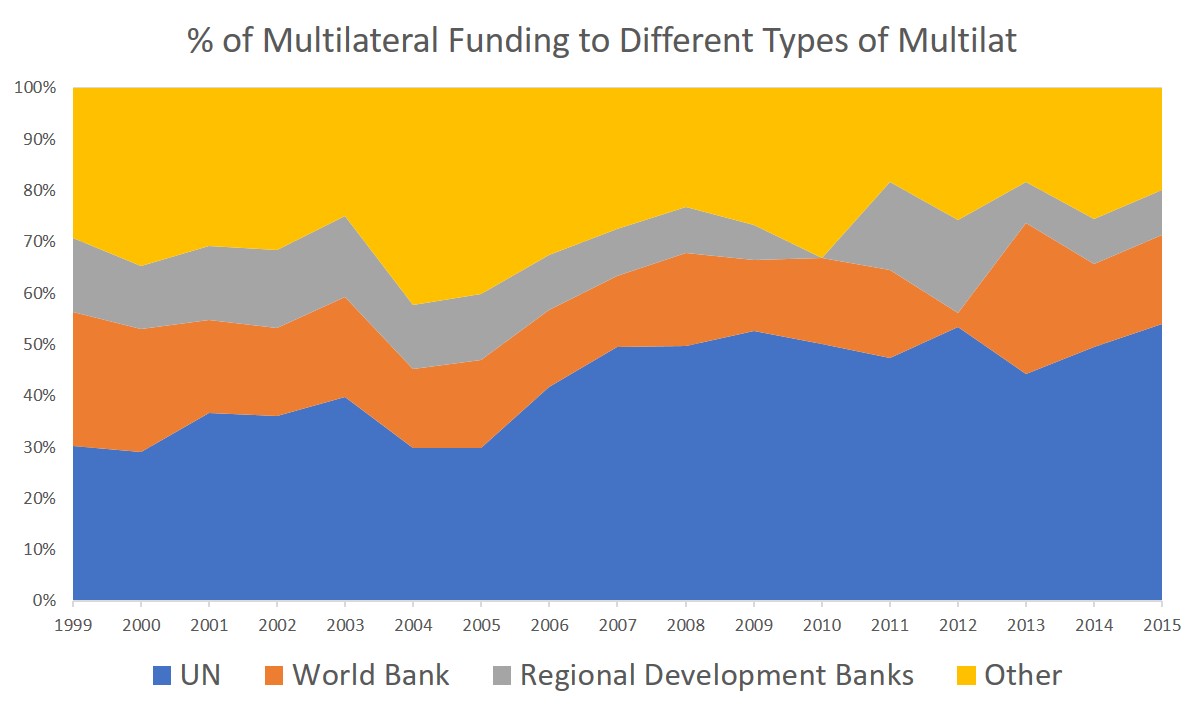 What about what about Watkins’ claim that McCully, “stared down his critics – and there were many of them – for his determination to redirect the aid budget to our own back yard, the Pacific, and refocus it on economic development rather than handouts.”

Obviously there are some conceptual issues here. Is aid to improve education or eradicate diseases, or to change norms about domestic violence, any more of a handout than aid to build a bridge or a runway? Development is multifaceted. If you don’t get this, think about your own life. Was the education you received any more a handout than the roads you drive on are?

Conceptual challenges aside, what about the empirical matter.  What changes did McCully bring? 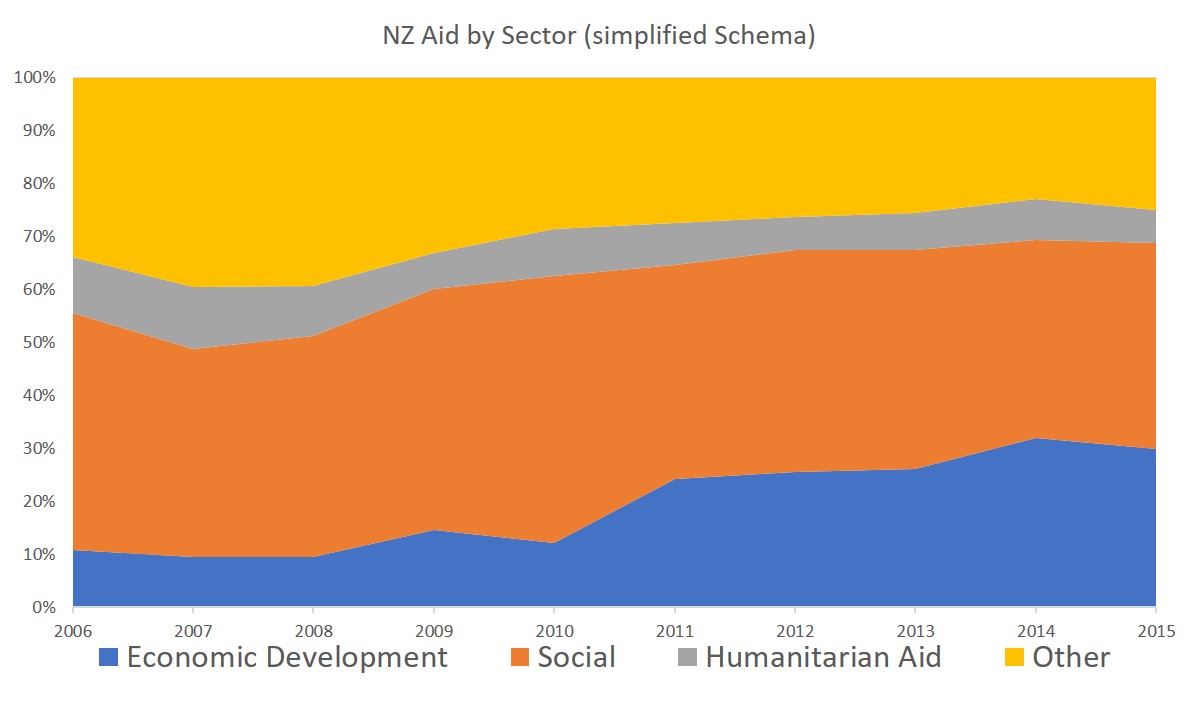 (Sources and calculations for this chart can be found here.)

That leaves us with the Pacific. For what it’s worth, I don’t know if Minister McCully actually had any critics to ‘stare down’ in this particular area. Most members of the New Zealand aid community have always thought we should give the lion’s share of our bilateral aid to the Pacific. As a result, we’ve done so for a long time. Minister McCully did not change this. However, during his time as foreign minister the share of New Zealand aid given to the Pacific increased, as the chart below shows. 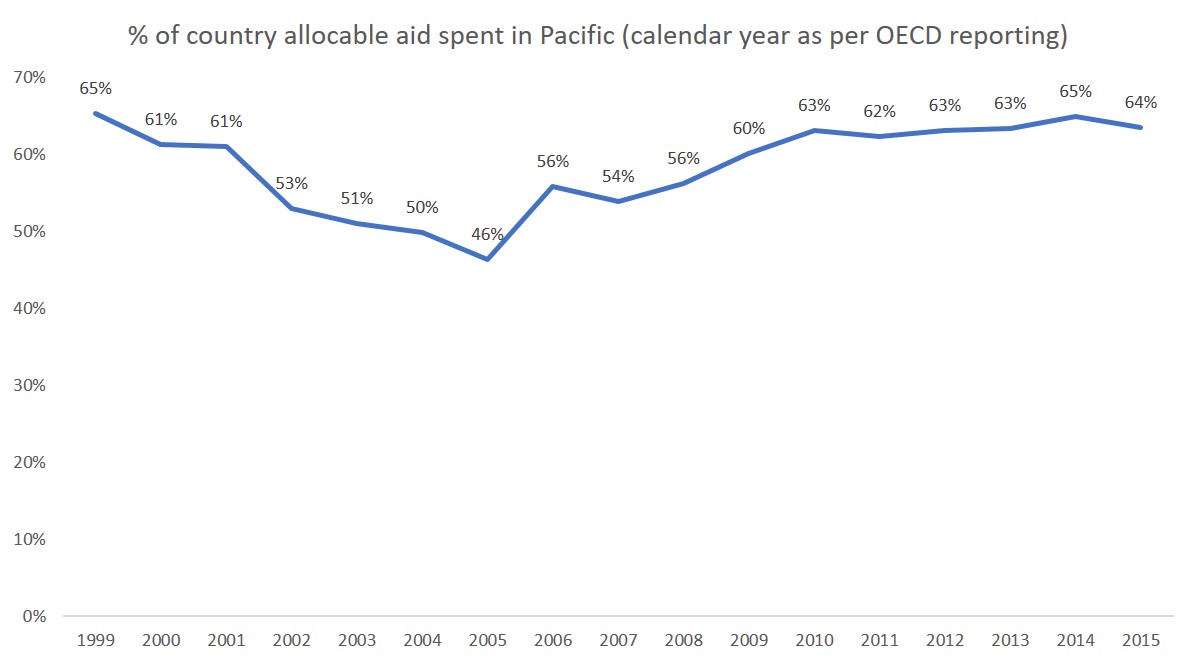 (Source and calculations for the chart can be found here.)

Before you start shouting, “take that criticz! stared you down!!”, remember that aid to the Pacific was already trending upwards when McCully took the helm. It had been doing so since 2005. Also note that the ‘McCully effect’ on aid to the Pacific is about 6 percentage points. Once again, this is not a transformation.

Murray McCully did change aspects of New Zealand aid. I’m hoping to write about this more in coming weeks. But the largest changes he wrought were qualitative — to do with his leadership style and its impact on how well New Zealand gives aid — they weren’t quantitative. The direction and emphasis of New Zealand aid spending changed somewhat under Minister McCully, but the change was less dramatic than people think.