Is that true? If it is, it would be a great outcome in tough times.

Is it true? The short answer is no, and yes.

For the longer answer, read on.

First, contrary to Minister Peter’s claim, there is now no longer a budget line called ‘Vote Official Development Assistance’. There used to be. It made it easy to work out annual aid spending. But it’s now been subsumed into ‘Vote Foreign Affairs’. The change has no impact on the ground: we still have an aid budget. But anyone who wants to work out the aid budget has to piece it together line by line from Vote Foreign Affairs data.

That’s what I did yesterday afternoon. (Not much fun; thanks for asking.) Because I had to cobble together data, I’m not completely sure of the following. I’ve checked carefully though and am pretty confident.

If you look at the breakdown of headline spending details in the official Vote Foreign Affairs budget documents (pages 2 & 3) you’ll see international development assistance (aka aid) mentioned twice. The two spends total to NZ$869 million. If you download Treasury’s detailed spreadsheet of budget data and look for spending categories mentioning ‘international development cooperation’ you get almost the same number. If you use the same spreadsheet to compare over time you get the following chart. 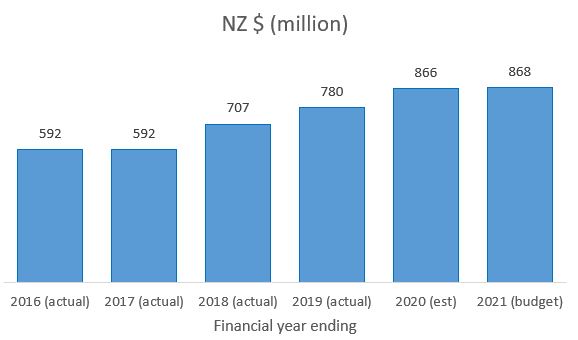 (The chart’s not inflation adjusted; it doesn’t matter for these purposes.)

I have to admit, my skills with arithmetic were never great (blame it on surfing) but the numbers are clear: an increase of $2 million. That’s a lot smaller than $55.6 million.

And $868 million is actually less than the amount the government said it would be giving in the 2020/21 financial year when it predicted forward spending in the budget last year. The “increase” is not an increase in that sense either.

However, New Zealand nominally prepares aid budgets in three year allocations: so-called trienniums. Next financial year will be the final year of the current triennium. And as it happens, we are on track to spend more aid in the present (2019/2020) financial year than we thought we would at the time of the last budget. We also spent more aid than we thought we would in the 2018/19 financial year. You can see that in the chart below, which compares planned spending from last year’s budget with spending estimates and plans from this year’s budget. 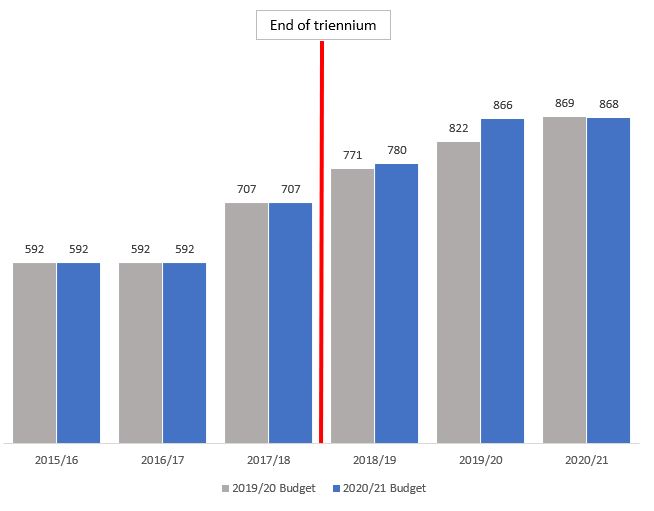 If we were to stay true to the overall triennial budget (at least as it was stated in May 2019) we would need to reduce aid spending in the coming financial year. But now we’re not going to. This means that, over the current triennium, we will spend $53 million more than we had said we would at the last budget. That’s not quite the same amount as Winston’s claimed $55.6 M, but it’s close enough that I think it’s the source of his claims.

So next financial year, aid won’t increase much from this year. But it would have gone down if we’d stuck to the original triennial budget. That cap’s been lifted though, and so in a sense aid has been increased.

At least that’s my best guess.

MFAT, if you think I have it wrong, please email me. I’m happy to make public corrections.

At some point, after the current coronavirus crisis, perhaps we could also have a chat about producing aid budget documents that are as clear and informative as the Australians provide. That would be a great step forward in transparency.

For now though, while I’m tired of looking at spreadsheets and PDFs, I’m willing to say “well done”. The increase isn’t quite what it sounds. But it’s a lot better than aid falling to stick to the original triennial plan. The government deserves credit.