Welcome to my promised second email on the New Zealand government’s aid budget. I’ve had more time to look at numbers, more time to struggle with spreadsheets, and more time to think about issues with the data. Here’s what I’ve found. Note first though that:

(1) I’ve made a data pack, which you can download, that shows source data and workings and more details.
(2) I was wrong in my last email to emphasise the importance of Cook Islands. It’s one of our larger aid recipients, and it is no longer eligible for ODA (as per OECD rules), but it doesn’t get enough New Zealand aid to change the high-level figures much. And so, for simplicity’s sake, all numbers in this newsletter include aid to the Cooks. (In the data pack l show what happens with it removed if you’re interested.)
(3) Government aid reporting is not nearly transparent enough. This is a broader issue. For now though, one consequence is that I have had to make estimates at times. You can read details in the data pack. The estimates will be off, no doubt, but they will not change the big picture much.

As you can see from the orange line in the chart, with inflation taken into account, aid will fall in the coming financial year. It will grow, but only ever so slightly, in the following two financial years.

Aid Generosity (Aid/GNI)
The next chart shows you New Zealand’s estimated government aid spend over its Gross National Income. This is the standard international measure of aid generosity. Aid/GNI fell under the last National government but then rose quite considerably when Winston Peters was foreign minister. As you can see, it is now set to fall again. In this time of global need, the New Zealand government is becoming less generous, not more.

But can we afford it?
One argument that is sometimes made against increasing our aid budget is that we just cannot afford it. This is not true. Aid, as you can see in the next chart, currently amounts to less than 1% of core government spending. We could increase aid at a reasonable pace and not bankrupt the government. 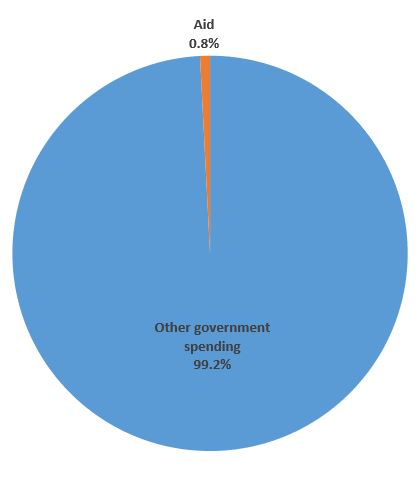 In short, New Zealand aid is barely increasing, which means it’s stagnating once inflation is taken into account. And our economy is projected to grow, which means our aid generosity (aid/GNI) is set to fall.

All this in a time of global need. We could easily afford to do better — aid is a tiny slice of government spending.

Fortunately, the aid budget for the next triennium is not set in stone. It could improve. But this will require the government to change tack. This will require it to show the world that it cares. Will it?